Lack of hair and insufficient density or unsatisfactory shape of the eyebrows are conditions that can fully be corrected. The results of correction are permanent and produce eyebrows of the desired shape and density. This can be achieved by eyebrow transplantation

The method used is a mini-invasive procedure for implanting separate hair follicles in the eyebrow region. The technique allows full building of the eyebrows when these are lacking, as well as increasing their density or changing their shape. The manipulation can be done upon permanent makeup as well. Transplanted eyebrows are quite natural in appearance and have the form and density the patient desires.

The procedure is done in two stages, completed within several hours. In the first stage, separate hair follicles are extracted from the back of the head. This is done by means of the high-precision device (Punch Hair Matic) of the French firm Medicamat on the basis of the AVA FUE technique. The process consists in separate pricks of a small sharp tube (punch) with a diametre of 0,5 mm. The small size of the punch allows extracting separate hair follicles without unnecessary tissue attached to them. After extraction, no scars remain in the donor zones and hair density there does not decrease. Follicle implantation is performed using fine implanting devices (injectors) that are needle-wide in diametre and correspond to the diametre of the follicles. During the operation, the surgeon strictly controls the direction and angle of hair growth and the depth of implantation. These are necessary conditions for achieving a very natural result. The procedure is done under local anesthetic, which makes it quite painless. 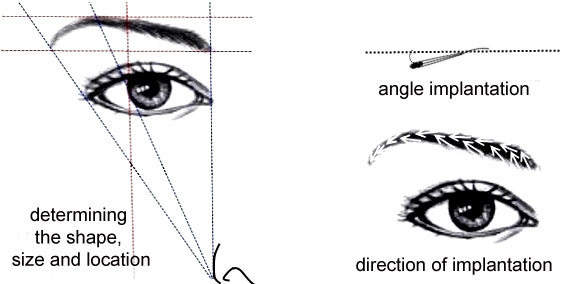 The transplanted eyebrows continue to grow up to one month after the procedure, after which they fall away by the end of the second month. Starting from the third month and until the sixth, all the transplanted hairs begin to grow. That is when the final result is visible. The achieved shape of the eyebrows is permanent and does not require maintaining by epilation. The only care that the new eyebrows need is limited to monthly cutting of the hairs, which retain their ability to grow long.